Ash are currently touring Kablammo!, their first album since 2007. Seeing the Northern Irish three-piece on stage feels like a giant shot of euphoria and excitement, just as it felt in their chart-topping heyday. I catch up with singer Tim Wheeler before their show in Hamburg and ask him about solo records, Star Wars, the power of nostalgia and the problem of being considered a serious artist while sitting in a vodka filled bathtub. 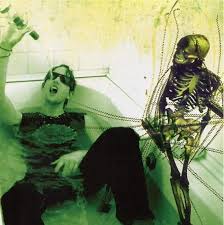 I’d like to start with showing you a picture which you might recognize (pictured left). It’s the back cover of Free All Angels. I guess that it’s not actual Vodka that you are bathed in. So you might still have some memories of it?

Tim Wheeler: Yeah, that was a promo shoot in a photo studio in London. It was pretty fun. We were just messing around, really. There’s a heavy metal movie called The Decline Of Western Civilization Part II which features Chris Holmes from WASP in a swimming pool full of bottles of vodka. The picture was a tribute to that – but Chris Holmes’ probably was actual vodka. (laughs)

How much of yourself in 2015 do you still recognize in that man in the bathtub?

Wheeler: I’m glad that the photo exists, I think it’s pretty cool. We had a lot of fun, it was a good time. I probably wouldn’t do it again now, but I don’t regret it. Although pictures like that sometimes got in the way of us being taken seriously as musicians. Some people thought we were just party idiots. But our image has changed, luckily.

The picture is a good example of the idea of rock music as the ultimate outlet of adolescent feeling. I think Ash always managed to put that adolescent feeling into songs, even on your recent album, when the band members have a combined age of 100 or more. How do you do it?

Wheeler: I think it’s just in our DNA. We started when we were 15 and when we play nowadays, part of us is still the 15 year olds. It’s not that we intentionally play teenage-like music. That sense of energy is just locked into how it sounds when we’re together. The stuff that sounded best was always fun stuff.

You did a solo record last year about the loss of your father. Was it obvious to you that you had to keep serious topics like that separated from what you do with Ash?

Wheeler: Yeah, it was too personal. I started writing while he was getting ill with dementia and it was very cathartic for me. It helped me understand what I was going through with my Dad and why I felt so powerless. Also, sound wise, it was something different than guitar rock. Probably not what fans want us to be. If we did something completely different, especially live, we would probably lose one of our strengths. So I recognized: The next Ash record will be a blazing guitar record. And I’ll get my experimental and personal stuff out of the system with my solo record.

Wheeler: Maybe. I like to experiment. I love keyboard. I’ve got a great vintage synth collection, and I wrote a lot of stuff on the solo record on piano. I’m considering maybe making another one with songs that I put aside because they didn’t quite fit the Ash thing.

Now the blazing guitar record with Ash is released in the shape of Kablammo! Which means you broke your promise on not making any more albums, which you announced in 2007.

Wheeler: Yeah, I thought we were going to get extra criticism for this if we didn’t come up with a really great album. But nobody blamed us, in the end.

On the other hand, you didn’t get a lot of praise for the idea to focus on singles because its a more up to date format.

Wheeler: We got a lot of shit for that, actually. But it was important for us, creatively. There’s a lot of great freedom in doing singles, because you don’t have to care about how several songs slot together. And it broke the cycle of album, tour, album, tour.

So why the change of mind?

Wheeler: I think with the singles project, we did an extreme version of it, releasing 26 singles in a year. We pushed that pretty far. And we always tend to look for the opposite of what we’ve just done. After having done the singles project it was a great challenge to remember how to put an album together, for the first time since 2007. It’s much harder, conceptually, than just doing singles. You have to think of a journey. You have to give yourself some restrictions, like this song has to sit in the same collection as this song and so on. We’ve tended to leave things out in the past because we thought they didn’t fit. Some really nice songs have been lost as B-sides in a way because of that, which is a shame. Sometimes I wish those songs would have got more attention.

Ash being a singles band is conventional wisdom as is your image as a band with a juvenile sound. Trailer was marketed with a “guaranteed teenagers” label, NME once called you “the oldest young band on the planet”. Are you glad that you’ve gotten rid of that now that you’re approaching your Fourties?

Wheeler: It was a blessing and a curse. It was part of our appeal that we were the same age as a lot of our fans. It was a good calling card, and it’s always good for a band to have a talking point. But it was also a pain in the ass. There was something patronising in how a lot of people spoke about us. It was hard to get taken seriously.

When I heard Kablammo!, it worked like a time machine: I felt like being a teenager again, listening to songs full of euphoria and optimism. Of course, that’s a great thing for a pop song to do. And it’s a great gift for a band to be able to evoke that and keep doing it for more than 20 years. On the other hand, you don’t want people to listen to your music and come to your show for nostalgia, do you?

Wheeler: I’m totally happy with that. Of course I want to bring in new fans, and I want to keep making new music and keep pushing myself as an artist. But I’m very proud that the old fans have sticked with us. Music is very powerful, maybe it is the most powerful vehicle to send you on a journey and bring back old memories. When we play a song like Goldfinger, this kind of look comes over peoples eyes and you see them daydreaming into the past. In moments like this I wish I could see what is going on in everyone’s heads. In a cloud above the audience. (laughs) Nostalgia is not a bad thing, as long as you don’t rely on it.

You seem to be at ease with where you are as a band and it seems there’s not too much ego stuff going on, within the band and with others. How come?

Wheeler: It’s just fucking hard being a musician. In the nineties, it was very competitive, especially being part of the London music scene when every journalist tried to get you to slag off other bands. There’s a few times I did it, and I always end up meeting that band. I mostly found out: They are nice people that I have a lot in common with. I would like to become friends with them. Then I always felt terrible for having been rude to them.

You’re on tour with We Are Scientists now. Seeing how much fun you have on stage, it seems almost like you’re on holiday with your mates.

Wheeler: It’s fantastic. We played together in Australia a couple of years ago and it was a really good fit. We also live very close to each other in New York, so we hang out a lot. We’re really close friends. It’s fun being on tour with another three-piece. We play a collaborative set every night to make it special.

Speaking of special shows: I just read the collected works of Lester Bangs and he claims that the purpose of a rock star is to make a fool of himself, so that we don’t have to. We want them to break boundaries, even the boundaries of their own dignity. We want them to wear the leopard print trousers on stage that we would elsewhere deem outrageous.

Wheeler (laughs): That’s fantastic, I like that. And I’ve got a cheetah print shirt that I will wear tonight!

Great! So you do agree?

Wheeler: Yeah, it’s a great way of attention seeking, but we don’t do it as much. What Lester Bangs wrote about were really Dionysian times for rock stars. Sadly, it’s slightly missing from music now. People are maybe a bit too concerned looking cool these days. And as you’re getting older, you want to have a little more dignity.

Do you have any regrets?

Wheeler: Not really. We did take some risks. Back in the day, we put out a single like Candy as a guitar rock band. We called our album Kablammo!, which is a bit of a ridiculous title, but a good way of showing people that we are still a fun band. I walked on stage with my Flying V on fire. We had gas canisters which might have blown up one of these nights and blown my head off. But that’s cool. I probably wouldn’t record us vomiting and stick it as a track at the end of our album anymore, though (laughs).

Christmas time is just around the corner. Are there any plans to do a follow up to the Christmas album you did with Emmy The Great in 2011?

Wheeler: Maybe. That record has got a bit of a life of its own. It goes away for most of the year and then, come December, people start sending me messages on Twitter that it’s their favourite Christmas album. I’ve got one song that would make a pretty good Christmas song that I wrote just after the album came out. So there might be another Christmas record, one day. Maybe an EP. And we’ll play Christmas Time (I Wish I Was Surfing) with Ash when we’ll be on tour in Ireland.

That leads to my last question: You will be playing in Cork the day that the new Star Wars movie will hit cinemas in Europe. Being large fans: Did you just forget to take a day off?

Wheeler (laughs): I think Mark’s got a plan. He’s an even more obsessive fan than the rest of us and he wants to see if we can get a midnight screening at a local cinema after we played the show. So we can all watch it together. I hope the movie will be a big improvement on the last few. From what I’ve heard so far, they’ve learned from the mistakes.