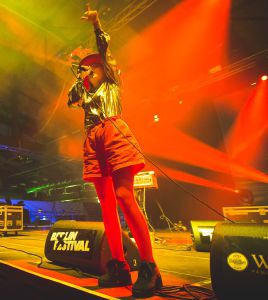 Austra seem to be enjoying themselves on tour right now. They’re in Europe for a couple of gigs and I catch up with singer Katie Stelmanis before their show at Berlin Festival 2014. We talk about the techno influences for Austra’s soon to come third album, the war in Ukraine and what it feels like to be compared to Evanescence.

Hi, Katie! I got here straight from my vacation and can hardly deny that your tour schedule looks like a nice journey as well. Do you enjoy being on tour right now or does it feel like proper work?

You can admit it, I won’t tell your record label.

What do you do on your days off?

Stelmanis: Mostly just relax. When you’re in the touring grind, it’s just a lot of driving and sitting in venues and playing shows, so it’s really nice to be able to sit outside and walk around and just do nothing.

Do you spend lots of time with your bandmates or does everyone stay on his or her own?

Stelmanis: A little bit of both. But we see each other so much when we’re on tour that usually when we’re off tour we don’t really hang out.

I have to refer to my vacation one last time: I was afraid I couldn’t make it here in time because some of the railway workers and airline captains are on strike. I was wondering: If there was something like an International Union Of Pop Stars, which aims should it be fighting for?

Stelmanis: I think that he aim of pop stars should be essentially to forward the idea of tolerance. Our shows should be this space that people can come into and see no boundaries. There will be no such thing as racism or sexism. Pop music and music in general should be moving towards a world where everybody loves each other. That’s what pop music should do.

That’s much more open minded and much better than my own idea of this Union’s agenda. I would have loved if it could just ban some people from ever releasing any music whatsoever again. If you were the Union’s chairwoman: Is there someone that you would like to ban?

Stelmanis (laughs): It would have to be someone that I am really against, politically. Maybe someone like that guy who Rihanna was dating? That guy who was physically assaulting her?

Stelmanis: Yeah, I’d ban him. Just because he is a public abuser. People should stop buying his records.

You’re very outspoken about political topics. Regarding your Latvian heritage: Does it worry you when you hear the headlines from Ukraine or the news that NATO is planning to send more troupes into the Baltic states to protect them against Russia?

Stelmanis: It’s terrible. The whole grandfather side of my family still lives in Latvia. It’s hard to keep up with the news on world politics because I’m always moving. But it just seems so crazy to me. Especially what’s happening in Israel and Palestine. I just had this conversation with my bandmates about this resurgence of racism in Europe. Nazi Germany was 70 years ago, but now people blame the Jews because of the low economy. This stuff happens again and again and again. It’s like a cycle and it seems that people never learn. That’s depressing.

Do you think that you can change something about it, being an artist and being able to raise awareness?

Stelmanis: We’re in a really unique position right now. All the propaganda in the world doesn’t work as well because we got things like Twitter and Facebook. For example the Israeli assault on Palestine was so heavily documented. There were tons of photographs that made it obvious that the Palestinians were suffering. We have access to all this information and that is almost overwhelming. There’s so much fucked up stuff going on in the world right now. People don’t know where to start in some ways.

So you’ve got to chose one thing and work it out?

Stelmanis: It’s always easier to stick behind one thing. For example the whole Occupy movement made a lot of ground. You have to rally behind one thing and I think that is starting to happen. In America it’s getting obvious with all the things like Ferguson or gun crimes or with the oil that it’s basically a class war. It’s the same everywhere.

You played in Leipzig last night and friends of mine told me that you mentioned it was one of your favourite places on tour. That’s what you say every night in every town, don’t you?

Stelmanis: No, not at all. Leipzig is one of our favourite places to play shows. We’ve had some of our best and biggest shows there. And I’ve heard a lot about Leipzig, like people telling that it’s the next Berlin. I’m not sure if that is true or not, but we really like it. A lot of times when we play in Germany, audiences are really reserved and kind of boring. But Leipzig is always crazy.

So we’vre reached the stupidest question of this interview: The venue that you played at in Leipzig, Täubchenthal, is serving a beer called Astra. I can’t leave you without asking: Do Austra like Astra?

Stelmanis (laughs): I don’t know, I’m not a beer drinker.

You just ruined the headline that I’d dreamed of: Austra loathe Astra.

Stelmanis: I’m sorry. If you’ll find any wine called Astra, I’ll let you know if I like it.

Thank you. Apart from the beer and wine being served: What does a city need to be an exciting environment for you to live in?

Stelmanis: That’s an interesting question because I feel like I’m currently in a state of limbo where I don’t know where to plant myself. A city has to be affordable. You need space to make art and make music, so that rules out a place like New York, it’s too expensive to live somewhere like that. You have to have a community. I like people to have resources, access to good food and good friends.

Do your bandmates have any say in where you are going to plant yourself? It doesn’t make being in a band easier if you all live in different places.

Stelmanis: That’s true, it’s hard. I actually moved from Toronto to Montreal, and the rest of my band still lives in Toronto. But we write music in weird ways. Any sort of writing that I do has to be done by myself. So in that way it’s good that I’m a little isolated. All I do is work when I’m in Montreal.

But didn’t you point out that Olympia, your current album, was a very collaborative effort?

Stelmanis: Yeah. That was a record where I’d just start a song until I’d run out of ideas and then present it to the other people in the band and let them fill it in. I wanted to integrate the whole band into the process. But I don’t think I’ll do that again. Of course they’ll be integrated in beat making and production. But apart from that I see it more as an isolated process.

So, apart from the EP that you released this year, is there any new material ready?

Stelmanis: We’re working on another album, we’re probably like half done. It will be out sometime next year. This time I was working a lot on tour, which I never did before.

Do you think that your training as a classical singer might have resulted in that rather isolated method of writing? Basically, it’s all down to yourself, it’s just you and your voice. You can ruin everything or you can win over an audience, you’ve got all the responsibility.

Stelmanis:  I never really thaught about it like that. And I got all sorts of training when I was young: I was a singer, but I was also in a choir. And I played piano, which to me is the most terrifying way to perform because you’re actually completely alone. That is way scarier than singing.

But you play the piano on stage every night! If you’re so afraid of it, does that mean it’s not plugged in?

Stelmanis (laughs): What I’m playing now is rather easy stuff. When I was 19 I was a much better piano player than I am right now.

It must be difficult to perform the Olympia songs on stage. You mentioned in one of your interviews that you put a lot of emphasis on detail, and that specific sound must be hard to recreate, especially in a festival setting.

Stelmanis: Definitely. When I look at the grand scheme of albums, I feel like Olympia was the studio record. You know, we went to the studio for a month and we just like played around. There was more emphasis on the sounds and production than on the general vibe, in a way. Live, some of these songs just don’t work and we just don’t play them. We only play roughly half of them.

Will this be different on the next album? Have you got the live setting in mind when you are writing and recording, wanting to make sure that these songs can be recreated on stage?

Stelmanis: With the new material I’ve taken a lot if influence from DJing. I’ve been DJing a lot more and I feel like that has influenced the structure of the songs. Dance music is more about the space between than about what you actually hear and that was really helpful for actually constructing a song.

I’d like to find out about some more influences for your new album in a couple of minutes. But before that, I’d like to talk about some assumed influences for Feel It Break and Olympia. Your sound has been compared to everyone from Giorgio Moroder to Kate Bush to Depeche Mode to Evanescence. Some of those references seem rather funny to me. Which one was the oddest to you?

Stelmanis: Evanescence is a pretty weird one, that one freaks me out. No disrespect to Evanescence, but we just don’t sound like them. I find that when you’re a woman you pretty much get compared to other female artists.

There must be zillions of singers who have been compared to Kate Bush.

Stelmanis: Yeah, if you’re working with beats and you have a big voice, you automatically get compared to Kate Bush or Björk.

In the case of Evanescene: Did you ever feel the urge to track down the person who wrote that and ask him or her: What the hell is going on in your twisted mind?

Stelmanis: Actually, I know the girl who wrote that in NME. I was like „What? No way!“ But I didn’t talk to her about it. I don’t care that much, it’s just kind of funny.

Has it ever been the other way around, that you got compared to someone that you didn’t know yet, you checked it out and felt it was flattering afterwards?

Stelmanis: That was Kate Bush for me. People always told me that we’d sounded like her, but I’d never listened to her. Then I checked her out and thought: Whoah, this is pretty cool.

So who or what inspires your new tracks for the third album?

But it must be hard to recreate a Berghain situation, the euphoria at 5 a.m., in your tour bus.