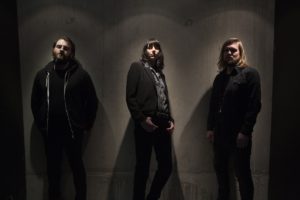 „Our band is a team effort“, say Band Of Skulls. Photo: Andy Cotterill

It’s the first time Band Of Skulls play Pure & Crafted Festival in Berlin, which doesn’t come as a surprise: The festival has only entered its second year and combines live music with showrooms full of custom motorcycles. I meet Russell Marsden, Emma Richardson and Matt Hayward next to their dressing room before their show on Friday night as the second biggest act of the lineup. We talk about music that always sounds better when you are driving, the disastrous comedown after the Brexit vote and how to trick the others in Band Of Skulls into liking your own ideas.

Motorcycles are a major attraction at Pure & Crafted. That’s why I would first of all like to know: What is your favorite means of transportation?

Russell Marsden: We like traveling in general. I like planes and busses. If I had to pick one, I’d go for the bus. You don’t get jet lag, still you can move quickly from one place to another. You get attached to it, it’s your home. And what I like most: You wake up and you’re somewhere else.

Emma Richardson: Me too.

Can any of you ride a motorcycle?

Russell: I tried it as a teenager. I had a friend back in Southampton who was an enthusiast. He bought old bikes and made them into hot rods, taking all the safety features away. We would ride them around his neighborhood, with no license. It was really good fun. Don’t tell my mum!

If the three members in Band Of Skulls were to compete in a race on motor bikes, who would be the winner?

Russell: Matt could win because he would learn the technique quite well. Emma would be the wild racer who doesn’t even know how to brake. So probably, I’d lose.

The idea of attaching motorcycle and fashion attractions to a new festival might mean that a bunch of great bands put on stage is not enough any more to make the event a success. It’s like the equivalent of giving away your songs for video games or movie soundtracks or adverts, which you do quite regularly. Isn’t it a shame that you have to find means like that to attract a bigger audience?

Matt: I don’t think so. We’ve seen a lot of festivals, and 10, 15 years ago, you’d have a rock festival or a dance festival. It would be solely one genre. That has changed, now you have all kinds of music, because that makes it easier to attract a bigger crowd. I think, that mix can be a really, really good thing. And things like Pure & Crafted are amazing – combining music and something really interesting to see. Music business in general, be that festivals, bands or record companies, need to find other ways to create something new and different to bring people in. So something like this is incredible.

Russell: We have a thing like that in England, but with chefs and cooking. I think that motorbikes are way cooler than that.

What kind of music do you listen to when you are driving?

Russell: I usually just put on the radio. Especially in America the music selection is amazing on the radio. Not as narrow as in England, much more variation. You never know what you’re going to get. That’s what I like about it: Normally a song has a certain feeling. You might have thought it was a bit cheesy, but driving through a different landscape, all of a sudden, it sounds great. It changes your life. You have an epiphany, with Elton John! (laughs)

Emma: And you’re concentrating more on the music when you’re in a car. When I’m on a long journey, I try to pick out a random record from my collection and then listen to it over and over again. You get to know that record so well. You don’t do that so much in other situations. It’s a good opportunity to listen and really appreciate it.

Whose artist’s music does sound better in a car than anywhere else?

Matt: Queens Of The Stone Age. They also seem to be driving a lot in their videos. (laughs)

Let’s talk a bit about the new album. I read in your press release that it’s more focussed, which came as a surprise to me. Most bands start to digress by their fourth album and try to do lots of different things.

Russell: We did try different things, really. We explored a few things, style wise. But within that, all the songs are still quite succinct. There is a lot of ideas. We’ve always had a lot of influences. On your first record, sometimes you take one element of that and present it to the world, and then gradually evolve, trying not to leave the people behind who liked it. It blew our minds that we could even do our first album. The second album is almost like a blur, that’s always one of the toughest moments for a band. Our third record had all the elements of our early career, all in one. So once you do that, you’ve done it. There’s no point in doing it again. That’s why it is important to us as a band by now not to sound like our other three records, maybe we’ve fallen out of love with it. We wanted to push boundaries. This time we wanted to show all of our influences at once. I think, in the future, our records could focus on different elements each time. We’d like to put out more music more frequently.

But still in an album format?

Russell: We’re open minded about that. We don’t know how people will take in music, but we’d like to be not too strict.

If pushing boundaries was on your mind, the album title must be meant ironic, isn’t it? Working in default mode was obviously exactly what you did not want to do.

Russell: Yeah, you’re right. It’s a fun title. It’s always hard to write a title for something after the event, to find a small phrase or a word that sums up two years of experiences with the music.

How do you agree on stuff like album titles, new ideas and lyrics? It must be terribly hard to compromise, because you all contribute as songwriters.

Matt: We’re not confined to our instrument, nobody is precious about their particular thing. We don’t value any role higher than another, that is very important. We put all our ideas in the pot and then we mold it.

Emma: It’s all about the good of the song. We all know when something is good or when we can do better. If you know each other so well, you can judge things on that instinct.

Russell: The initial inspiration is very important. You can’t say: Today I’m going to write the lyrics to this or that song. It must feel natural. You need an initial idea, and if it arrives and everyone appreciates it – there it is.

Russell: I think it is more important to agree on what’s not good enough. We appreciate everyone being inspired. But if we can all agree on what’s not the thing to do, that is probably more helpful. Because our band is a team effort. When you play a song live, you want to feel proud of it, that’s important for all of us. We aim for an equal amount of pride and passion about the song for each member.

How do you try to convince the others in the band of your own ideas?

Matt: There are different tactics happening. (laughs) One might be to get the other two drunk and then present your idea. Another is to quietly play it in the background, all year long, each and every time. Then you present it and they feel like it’s catchy, something genius they might know from the radio. The worst thing you could do is go in and tell the others: „I’ve got the best fucking idea you’ve ever heard in your life!“ But honestly, we know each other so well, often there is a consensus on what is good and what is bad.

Russell: That’s true. We’re our own biggest critics. If you can pass the other two individually, you can be pretty sure that it’s a good idea and will go down well with our fan base.

Finally, I’d like to know how you reacted to Brexit. How do you think it will affect you as a band?

Russell: It already has affected us, as people. You feel a bit hopeless and powerless when you realize that your future is not particularly going into the direction that you’d hoped. Lots of young people in England feel so right now. It’s disappointing, especially because it did feel like a political move gone wrong. It was a mistake. There was no reason to do it apart from some power struggle. For us it means that economic things might become more tricky. But the biggest consequence will probably be that it will be much harder for younger bands to tour in Europe. And maybe the other way around, as well. We will both me missing out on the grass roots, I suppose. Let’s hope we can change something about it one day. We still feel European, and we’ll continue to act like that.