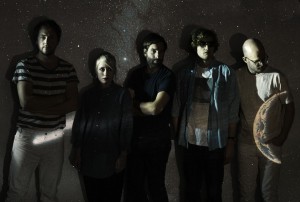 Bebban Stenborg is one of the most polite musicians I ever spoke to. When the phone is not working properly (which is probably down to my crappy headset), she takes all the blame, claiming that she “is deaf anyway” and probably not able to hear my questions because of that. When she says something quite nasty about Swedish music icon Per Gessle, she stresses that she has only heard about it, that she does not know Mr. Gessle first-hand and that “his older songs used to be good”. And she is even willing to join in the stupid game I made up at the end of the interview.

But of course we manage to talk about new album Optica as well, in spite of broken headsets and deafness. Bebban Stenborg reveals how the apokalypse influenced the record, if she can imagine Shout Out Louds in ten years time and if she is jealous of Lykke Li.

Shout Out Louds are celebrating their tenth anniversary this year. Is there going to be a party?

Bebban Stenborg: Yes, I think we will have a party. But there’s nothing scheduled yet. Our new record will be released in Germany first, so I think we will put on a party in Berlin and hope that we can invite everyone.

If you look back on ten years in the band: Which stage of your career did you enjoy the most?

Stenborg: The first time we played Coachella was great. That was in 2005 and it felt great to have made it to that stage. Palm trees all around, sunny weather – that was fun.

Most bands don’t get to see their tenth anniversary. Was there ever a moment when Shout Out Louds might have split up?

Stenborg: There was a time towards the end of the first album. Everybody was so tired. We did the last show in Brazil and after that we didn’t mention when we were going to meet again. Back then it could have happened. But it was just that everybody was exhausted and needed a break.

So let’s talk about the present. With your new album Optica you did everything on your own, even producing the record yourselves. Your aim was to be able to write and record in a very spontaneous way. That sounds great, but if you don’t get any outside opinions that might probably encourage you or point out some weak spots, I imagine you might feel a little insecure about the result. Since you finished the record, have there been times when you wished you could go back and rework some of the songs?

Stenborg: Usually that is a very difficult task. There are things that can be done different, but mostly we don’t realize it until much later on when we take the songs out on the road and play them live. That’s when we get to play spontaneous little improvements. Those things just pop up. But I think this time it is different. We took so much time making this album, we did all the mistakes. It took almost two years and now we are very happy with it. For the first time there hasn’t been a single moment since finishing the album when I wished we would have done something different.

It seems funny that light is one of the major topics of the album. You recorded in a basement in Stockholm, which is not quite the place you have in mind when you think of light. Last time, for Work, Adam wrote in Australia – back then it would have made much more sense.

Stenborg: First of all, I think that the whole Australia thing has been a bit exaggerated. Adam was there while we had a break, but we did most of the work together and recorded the album in Seattle. Nevertheless light is a fitting topic. I think that sometimes you need to be away from something to realise the importance of it. And that is what happened in that basement. There were no windows, you couldn’t see what season it was. So light became a presence in our minds because it was not present in the studio.

Stenborg: Yeah, for sure.

Baptising your album Optica and singing about astronomy, reflexion or refraction – I assume that all of you loved physics back in school and that it was one of your favourite topics?

Stenborg (laughs): No, I don’t think that anyone in the band had one of the natural sciences as their favourite topic in school. But I think that many of us, at least I have and I think that Adam has too, have developed an interest for physics after we finished school.

Still optics is an unusual topic to pick for songwriting, isn’t it?

Stenborg: The album is loosely based on everything that has to do with light. More than the science side of it we decided on light as kind of a guideline: the concept of light, both as a physical phenomenon and an essential source of life. And even more the poetic side of it, questions like how light is hitting an object or how the time of the day can change your mood. We talk a lot about visuals when we write music. Very often we describe sounds through something that isn’t a sound. We can say things like: I want this to sound more afternoon or more morning-like, night-like.

The cover of Optica shows a girls‘ silhouette. Who is it and why did you chose it?

Stenborg: I wasn’t involved in the process of the artwork because that is more Adams and Carls line of work. I think it is about the idea of projecting shapes with the help of light onto a body. That was visually a nice thing to try. And I think they just wanted to find a symmetrical figure, it wasn’t supposed to be very clear who it is. The girl is supposed to be anonymous.

Bebban Stenborg would not change a single thing about the new record. Image: Shout Out Louds

Stenborg: Maybe the future of music.

Stenborg: Yeah. I hope it is the future of the world. But right now if I had to pick one I think that the world of music is finally straightening up a bit. It has been so complex and strange for everybody who works with music during the last couple of years. Downloading and so on has just messed a lot of things up financially for a lot of people. As far as I hear, at least the record labels are now finding solid ground again.

You’ve been on tour with bands like The Strokes or Kings Of Leon, who have now become superstars. Lykke Li once did backing vocals on one of your records, and last year she had one of the best selling singles in Germany. Does that make you feel jealous? Do Shout Out Louds compete with those artists in terms of success?

Stenborg: There are times when we wish that we could live more comfortably right now. Mainly for practical reasons. To come home from a tour and feel like: “I have the money to go on vacation” – that would be really, really nice. After having worked for a long time I think that people assume that we have it made, that we travel in style and stuff. But we have travelled at a slow pace and that has been a benefit to us. I don’t think it would have been good for us to have that explosion of success. We’ve been going slow and steady and that’s why we lasted this long. If we would have done like Lykke Li, who basically came out of nowhere and became very huge very fast, we would probably not have been able to handle this very well, since we are five people and we are friends. I think that we are all pretty happy with the pace that we are going in.

At the end of the interview I would like to suggest a little game. It is ten years of Shout Out Louds, and „Shout Out Louds“ are three words. Logical conclusion: I mention ten topics, and you shout out the answers, which should consist of a maximum of three words. Alright?

You don’t necessarily have to shout.

Stenborg: Let’s go for it.

Sweden getting zero points at Eurovision 2013.

Sticking to the Optica-topic of astronomy: The most beautiful night sky you ever saw?

The most beautiful sundown?

Stenborg: Not for me.

The prospect of 27 shows within eight weeks this spring.

Well, you did very well, that was fun. Thank you very much!