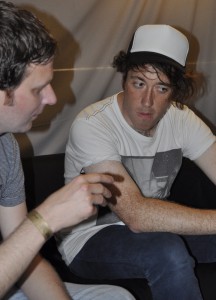 A couple of weeks ago I talked to Matthew Murphy, singer in the Wombats, backstage at Highfield festival near Leipzig in Germany. Just before the American tour, which starts today, he reveals his worst festival experience, labels his own band “schizophrenic” and tells us what the next album might sound like.

We’ve met at Highfield before: Three years ago I saw you playing table tennis backstage. For me it was one of those moments when I realised that being a rock star can be quite a boring job sometimes. Do you agree?

Matthew Murphy: I would, first of all, never describe myself as a rock star. I don’t feel like it.

So what’s on your business card, if it is not “Matthew Murphy – Rock Star”?

Murphy: I don’t have one. If I did, I’d go for “Songwriter”, maybe. The idea of a rock star to me is one of leather jackets, Ray Bans and Hollywood.

But isn’t that idea part of the myth that makes young people grab a guitar? Didn’t you dream of stadium gigs or number-1-records when you started out? Or at least of, er, Girls And Fast Cars?

Murphy: I mean, we wanted success. We wanted acclaim, we wanted fans screaming. Obviously, money is nice as well. But we never bothered about becoming famous, really. I never really thought about that, to be honest.

And you probably never thought about having to spend your afternoons playing table tennis in Germany.

Murphy: Of course there are some times when you really need to kill a few hours. I used to kill a lot of hours by smoking. I’ve stopped smoking now, so now I’ve got to try and find new avenues. This can feel really strange because I get this huge buzz when I am onstage, it is a massive adrenalin rush. And then the rest of the day is very boring. And it is like that every day: There is a huge downtime and a very short peak of energy.

At festivals it is a bit like that for your audience as well: You have to spend the biggest part of the day in your tent or wherever before the action on stage starts or your favourite band is about to play. Have you ever been to a festival us a punter?

Murphy: No. I’m not a camper. I’ve had a horrendous experience in school when I was camping. Dogs came into the tent and shat all over me. That was pretty scary. The first festival I went to was as a band. Although at our first Glastonbury we did camp, and I lost the tent. I had to walk around the whole site just shouting people’s names until one of them heard me. And then I made the vow that I was never going to camp again.

Are you sometimes nostalgic about the old days, when The Wombats started out?

Murphy: That was a lot of fun, when you think about it. Driving yourself to a venue, setting up your own stuff.

That does not sound very funny to me.

Murphy: Yeah, but it is, I think. I look back with fun memories. I probably fucking hated it at the time. But I loved the struggle of all that stuff.

You have spent almost as much time in The Wombats before the release of your debut album as you have spent since then. Which part do you prefer?

Murphy: My favourite time was just before our first album came out. We were being signed, had a record deal, we did South by Southwest, and something exciting was happening. That was an amazing part in all of our lives.

It seemed to me that there was some downtime afterwards, that you felt misunderstood after A Guide To Love, Loss & Desperation. Would you agree?

Was This Modern Glitch, which was slightly darker and had a bit more depth, a deliberate effort to change that?

Murphy: Every bands second albums are a rebellion against their first. I don’t know what the others in the band think about this. But I think that we were perceived just like a party band. But although our music is quite dancey and fast, the lyrics are quirky and deal with some quite heavy subjects, even on the first album. For This Modern Glitch I kind of wanted to keep that fun side, but also do songs like Anti-D to show that we are not a one horse jockey. 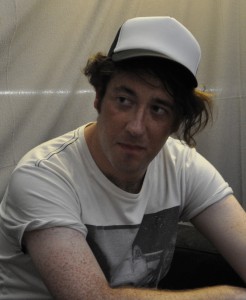 Matthew Murphy has got a full on rock record in mind.

Since you mention quirky lyrics, I can’t let you go without asking if you really do own a penguin suit that you wear from time to time, running around East London, as you claim in Techno Fan?

Murphy: No, I don’t. But a few fans have turned up in penguin costumes to our gigs, which I always like. There was a gig in New Orleans when our drummer Tord took it off one of the fans and wore it for the whole gig.

Did you ever regret some of the songs or the lyrics you wrote?

Murphy: No. I think I’m proud of everything. Maybe Backfire At The Disco feels a bit too young for me now, personally. That’s why we haven’t played that for a while. But we probably will do it again in the future.

It is one of your acclaimed dancefloor fillers. What kind of music makes you dance?

And if you are, it probably doesn’t matter as well.

Murphy: I think we’re a very kind of schizophrenic band. I don’t think we know what kind of band we are. Whether we are a pop band or an indie band or a rock band.

Murphy: That’s something I always think about. It’s hard for me to look objectively out on the band. I mean, I could sit here and tell you how amazing we are and stuff. But there is no point. But at the same time I don’t really care, either. I like the idea that hopefully in our career we make different albums. I know that we love big pop songs with weird lyrics. Weird, maybe clever lyrics. And so that’s just all we’re going to do, I think. It doesn’t matter how we dress the songs up, whether we dress them up in Converse or as Electro.

If you are not sure about people getting your message right – why don’t you use your songs as a medium to set the record straight? Wouldn’t that be the perfect way to tell people who you are?

Murphy: Of course. But I would never want to tell anyone: We are this band that should be placed here, somewhere between Busted and The Strokes. I would never say that.

That really doesn’t sound like a comfortable place to be in.

Murphy (laughs): I agree. But obviously I have messages that we want to get across, how we feel about certain topics and how our outlook on life is.

Will there be more of this on the next album? What can we expect?

Murphy: I want to do a really guitar driven album, a full on rock album. Whether that’ll actually happen, I don’t know. We recorded four new songs and there’s another couple in the pipeline. At the moment it’s quite rocky. One of the songs is quite Band Of Horses. One of them, my favourite at the moment, is just a big, massive ballad basically.

Do you write new material on the tour bus or during rehearsals and soundchecks?

Murphy: I’m pretty bad at working on the road. There’s something embarrassing about it to me. I prefer to work on it in seclusion, until I know that it’s ready to go out, which is a slower process of working, unfortunately, but that’s just the way it happens. I need to kind of lock myself in a cave somewhere and then write. Then I play it to Dan and Tord and we arrange it or work on things together.

I had a look on your schedule for this summer and it seems that you take quite a lot of time off between festivals, especially in comparison to other bands. Is that on purpose?

Murphy: Yeah, that was a conscious decision.

Why did you decide to do it like that?

Murphy: Because after the first album we all lost the plot. I was fucked. We felt like a cover band. And then making the transition from touring into writing the next album was weird. Because all of a sudden everything is dead. We have learned something from it. This time we wanted to play a couple of festivals, and then we wanted to focus on album number three. But that’s all being fucked up now because we’re going to the US for two months (laughs).

What do you do when you have got time off in between festivals?

Murphy: Trying to do stuff that hasn’t got anything to do with the band.

Murphy: Yeah: Trying to do life. Trying to get some stuff from life and then put it back into the band.

Have you got a release date in mind for the next album?

Murphy: This time next year will be our 10 year anniversary. So if it came out then, that would be very, very good. The last album felt like rushed. So this time I am trying not to churn them out but to take my time and make sure that it is nice and the quality of the songs is really good.

When you started out with The Wombats, could you imagine still being in that band ten years later? Has it turned out the way that you hoped for?

Murphy: Yeah, it has turned out brilliantly. We were very, very lucky. We never thought we would get to this. We always wanted to be comfortable, make enough money to rent a flat, get played on the radio occasionally. But obviously it has gone much better for us. I was wondering what it will be like for another ten years.

I was just about to ask that.

Murphy: I don’t know. We have only released two albums, but to us it feels like we have released four. That’s pretty mad. I think we will just concentrate on the next album and see where we go from there.