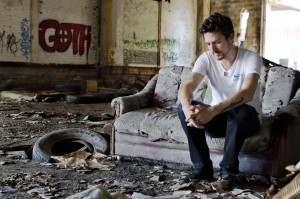 When Frank Turner feels down, he listens to The Weakerthans. Photo: Universal Music

Frank Turner just released his sixth studio album Positive Songs For Negative People. Of course, it’s amazing. To find out more about Britain’s hardest working artist (not my words, AIM gave him an award for this in 2012), I sent him a couple of questions via email. His replies reveal some interesting insights: Frank talks about the idea behind the album’s title, the music that cheers him up and the luxury of not reading reviews.

The most important message on your new album seems to be the reminder how important it is to stand together and believe in your own dignity to overcome hard times on a personal level and to make the world a better place in general. Is that the meaning behind Positive Songs For Negative People?

Frank Turner: Something like that. In a lot of ways, it’s a reaction to Tape Deck Heart, which was an album about a time in my life when things fell apart. After a lot of shit times, I started putting things back together, hence the new album.

Most of the new songs, and a lot of songs on your previous records, are incredibly uplifting. What kind of music (or behaviour) cheers you up when you’re down?

Turner: I listen to records when I’m down, for sure. Loads of stuff. Weakerthans, Pedro The Lion, that kind of thing.

To me, Positive Songs For Negative People is one of the most anticipated albums of the year. What were the last three albums that you waited impatiently for?

Turner: I don’t really know what’s about to come out that often, actually. I’m usually too busy. So I just enjoy things when they arrive. I was excited about the new Failure album though, and it certainly lived up to expectations. My friend Will Varley just finished making a new record which is incredible, but then I did sing some backing vocals on it, haha.

I found some odd comparisons in reviews of your new album: Frank Turner sounds like Bruce Springsteen, sounds like Green Day, The Killers, Dashboard Confessional, The Smashing Pumpkins, Oasis to The Levellers. What was the strangest comparison that you ever read about your own music? And which ones are the most flattering to you?

Turner: I don’t really spend that much time thinking about that kind of thing really. I don’t see it as my problem, or something that I need to care about very much. I guess being compared to Oasis is quite weird, to me.

The idea of a great frontman usually involves being glamourous, manic or rude. You seem to act rather down to earth instead when you are on stage. What is it that makes your performance inspiring and mesmerising for your audience nevertheless, in your opinion?

Turner: I have no idea. That’s for other people to say. I just try and play a good show and make everyone feel involved.

Finally, a question about tattoos. If you could chose any person that you could give any tattoo: Who would it be? And what kind of tattoo would you like to place on which part of his or her body?

Turner: I have actually inked a couple of friends (at their request) in the past, and I’m very bad at it, so I’d let someone else do it.