Otherkin from Dublin are quite obviously having the time of their lives. I meet Luke Reilly (vocals, guitar), Conor Andrew Wynne (lead guitar), David Anthony (bass guitar) and Rob Summons (drums) at Pure & Crafted Festival in Berlin, just before their first German show. They are sunbathing on a backstage terrace, beer bottles in hand, girlfriends on deck chairs nearby. We talk about ambition, the perils of marrying models, Zombies, the plans for their debut album and whether you would rather vomit on Mumford And Sons or Alt-J, and it becomes a more than jovial talk with lots of inside jokes, lots of laughter and some plans for Karaoke later that night.

Tonight is your first show ever in Germany. What do you expect? And what do you promise?

Conor Andrew Wynne: We heard that German people are crazy, so we’re looking forward to a crazy crowd.

Luke Reilly: What we can promise is a lot of energy. A lot of songs that will hopefully make people react and get involved and have a good time.

What must happen tonight that will prevent you from coming back to Germany for your shows scheduled for September?

Luke: I guess the crowd will be okay. What is more likely to happen is that we will do something outrageous, so they won’t let us back in. (laughs) 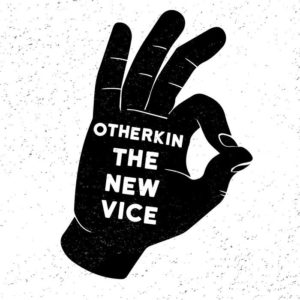 Tell me about the gesture on your second EP The New Vice that you do with your thumb and your forefinger. What does it mean?

David Anthony: It’s quite simple. It looks like an O, it means Otherkin and Okay.

I assumed that. So let me tell you to be careful with that. As far as I know it is considered as an obscene gesture in some countries in the Middle East.

Rob Summons: Really? What does it mean?

Rob (after everyone burst into laughter): Our guitar tech got a tattoo of that yesterday. I guess he’s happy we haven’t played the Middle East yet.

My advice is to release another record with some innocuous cover, so everyone will soon forget about it. As we’re talking: When can we expect your debut album?

David: Next summer, if everything goes to plan. We just finish writing it at the moment. We’d like to take our time instead of rushing it. You know, some people make such amazing debut albums that people still talk about 20 years later. We want to make an album like that, just smack people in the face. We’re very ambitious.

Rob: A lot of bands just put out the first album because they’ve written enough songs. That’s not what we’ll do. We already have written 40 or so songs.

Luke: I think we are actually at a good point. There are certain songs that we feel are probably not appropriate for a debut album, so we save them for down the line. If that won’t work, our debut album is going to be a triple LP. (laughs)

Have you got a producer, studio or album title in mind?

David: We don’t have an album title yet. We are probably going to murder each other when it comes to picking that.

Luke: We work in a studio outside Dublin. That’s where we recorded all our stuff so far.

Rob: We a know a guy named Dave, it’s like a shed in his parents’ back garden. Pretty DIY.

David: We won’t go to a fancy studio, it’s more important for us to feel comfortable. We can take our time there. And it doesn’t feel like work.

That leads to my next question: Do you think that the years of being on the rise, playing your first shows and creating a bit of stir are the most exciting chapter in a band’s biography? The rise to becoming a successful band might be more fun that actually being successful.

David: You’re right. This will probably be the most fun time for our band. We get to play in Germany, we get to meet great audiences and get to see amazing places. Of course, that is exciting, but it’s tough getting there. It’s very, very tough starting out. Nobody gives a shit about you. You play a lot of shows to basically nobody.

Rob: That’s why we enjoy the “small big breaks” that we have. Like playing here in Berlin, or in January, when we played in Moscow. I’d never thought I’d one day go to Moscow. Let alone play a gig to 200 sweaty Russians at minus 9 degrees. And having Conor lying on the floor playing a solo with 20 Russian girls air guitaring around him. There is nowhere else I’d rather be than in this band right now.

Luke: When you start out, there are so many first times. Like this is our first time playing in Berlin together. There’s no routine involved whatsoever. That’s something that we enjoy a lot. I hope that it will remain like that for a long time. A few albums in, a lot of bands become jaded. Like The Strokes. They seem like they burnt out. They all drank way too much, they all married models, and now they even stopped liking each other.

I think we can all agree on that. Still it seems that you wouldn’t exactly mind a level of success that could mean big time for Otherkin.

Conor: We’re quite calculated, but in a good way. We like playing to 20 people, but we like playing to 5000 people even more. We’ve got in mind what we want to do with our debut album and that’s the picture we are working towards. I think, the highest standards that we hold is our own.

David: We’re not the type of band that will just see how it goes. We all pretty much put our lives on hold to do the band. Two of the guys are doctors, they could work in a hospital instead. But this is what we want to do, this is what we chose as our career, full time. And we all know that is a very serious decision.

It is, indeed. If Otherkin won’t make it, you might one day be pursuing other careers, but you might always look back on your life as if it was a failure. Are you afraid of that?

Conor: Not at all. If we’ll have to break up in three years time, it will be nice to know that we tried it, that we had an amazing time and that we put our very best to it. I’d rather feel like a failure if I hadn’t tried being in a band, living the dream.

Luke: Exactly. We know that there are a lot of great bands who didn’t make it. It’s not all about writing great songs, you need a certain amount of luck and the right timing. But if I had chosen medicine as my profession right now, I’d certainly always regret not trying this and not giving it my best shot.

So far, things look quite promising for Otherkin. You seem to have realized that playing festivals is one of the most important opportunities to gain new fans. Is that true?

David: Definitely. We are a festival band. One of our strongest assets is probably our live show and we spend a lot of time to make sure that it works and that we can get a crowd involved.

Conor: A live show is such a crazy experience. I love going to a concert and seeing one of my favourite bands perform their songs. When I leave a show like that with my mind fucking blown, that’s the important thing. That’s what makes a bond between you and a band.

Luke: There were so many bands in the last 30, 40 years that were just four boys with guitars. So we’d like to bring something fresh. Particularly in our live show we try to give people a spectacle, something that they don’t see with every other band.

Do you practice that to make sure it works?

David: Not really, it’s been quite organic. We like to be spontaneous. Like Luke just jumped into the crowd one night and we saw how they loved it. So we try to repeat that when we feel like it.

Rob: We’ve played a show at Paradiso in Amsterdam. It was a full room of 300 Dutch people having a good time. I was looking at our guitar tech, then I looked back on the stage where Luke was supposed to be. And he was gone. We hadn’t planned it like that, but it was great fun. At the end of the night there were 50 people on stage with us, that was incredible.

Conor: We don’t overplan it. You know, we’ve seen bands smashing their guitars on stage. But it didn’t look like they were angry at all. It looked like it was in their script, instead. In the end, it must feel genuine. It’s all about energy. If you have fun, they have fun.

[We are now talking at length about Punk Rock Karaoke which is the last act of the line up on Pure And Crafted’s Club Stage and means that punters, like me, can perform on stage with a full band behind them. Otherkin “love karaoke so much”, they tell me, they even offer to be the backing band playing Honky Tonk Women while I’m singing. That doesn’t happen, still they prove their karaoke skills later that night. We meet again in front of the stage and they do their own Punk Rock Karaoke by playing Iggy Pop’s Lust For Life]

You played a lot of festivals this summer. What was your weirdest festival experience?

David: Our first ever English show was last summer at Reading and Leeds. It was crazy to play that as our first show in England, it is such a famous festival. I got a bit drunk the first night. So when we got to Leeds, I was behind the main stage and trying to get sick. I ran between the tour busses of Alt-J and Mumford And Sons, and I couldn’t decide on which one I wanted to get sick. In the end, I just did it in the middle and kind of like hit both with my vomit. There wasn’t too much space between them. (laughs)

Connor: We also played a festival in Ireland, in the country. The power went off eight times, for the whole place. Everything was pulled into one plug. There was one song that we tried to finish three times, but we never made it without the power going off.

Luke: But it made the show really good. It was something special. Before the power went, it was an okay gig. And after that it was just the audience chanting. And drums. With each time the power went again, the crowd got more and more rowdy.

If you could run your own festival, build your own site, book your favourite bands: What would in look like?

Rob: I think I would revive Joe Strummer. That would be my headliner.

Luke: I think if we had our own Otherkin Festival, we would probably have different areas with different themes. Like a zombie section. With zombie bands playing. People who are dead but have been revived.

David: He’s not talking for the whole band. He’s the one who’s obsessed with zombies! What we could probably all agree on is a garage rock festival. The Strokes, The Hives, that kind of bands.

Luke: And the headliner every night would be us doing DJ sets. And then karaoke!