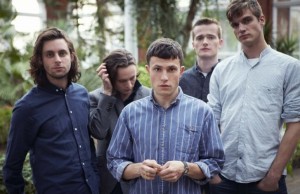 Hugo White (left) has got no idea what The Maccabees‘ fourth album will sound like. Image: Fiction Records

2012 has been a great year for The Maccabees. Their third album Given To The Wild reached #4 in the UK charts, they played some of Europe’s biggest festivals and even got nominated for the Mercury Prize, which will be announced next week. I met guitar player Hugo White at Highfield festival in Germany a couple of weeks ago and asked him about the dynamics within the band, what it feels like when friends like Adele or Florence suddenly turn into megastars and about (almost) meeting Bob Dylan.

Hi, Hugo. I remember seeing you three years ago at Highfield. Have you got any memories of it?

White: I have a memory of lying down behind the stage, because it was really, really hot. But it is hard to remember anything else. We have done so many festivals now, especially this year, it does become difficult to distinguish shows.

What was your highlight of this year’s festival circuit?

White: For us, this summer and the European festivals have been way above our expectations. We have had things like Benicassim – that was my highlight. I love Bob Dylan and we played after him on the main stage. He played at 10 pm and we played at 11 pm, right after him. No one is allowed on the stage when he is there. There is a lot of security and you can’t get near him. But because we were playing next, the security allowed us. We told them that we had to check our gear, so we ended up standing right behind him by the side of the stage, watching him play Like A Rolling Stone. That was great.

Did you get to meet him?

White: No. I don’t think anyone does. He never looks to anyone, which I like. He is not trying to please anyone, he’s not there to make friends. He’s there to play music and that’s the way he wants to play music. I admire that.

Could you at least pick up a souvenir that he left onstage?

White: I got a plectrum!

I guess you keep that in a special place in your house?

White: To be honest, I don’t know where it is anymore. But I got another souvenir: A friend of mine is a guitar technician. He works with Mumford & Sons, and they played with Bob Dylan at the Grammy’s or something. My friend took a label off Bob Dylan’s guitar case and gave it to me. It says “Bob Dylan acoustic” and I got that on my wall.

After the festivals you will be on tour with Florence & The Machine. You are good friends with her, aren’t you?

White: Yeah, we have known her for a while. It’s the same with a lot of those people. We weren’t like the best of friends growing up but we’ve seen each other, gone to each others shows when we were younger and so on. And now we keep in touch. It’s the same thing with Adele. We’ve known each other from living around London and suddenly these people are world stars. Florence is doing stadiums around the whole world, that’s just crazy. It’s obviously lovely of her to ask us and invite us along to America.

It seems that The Maccabees must be a very social band. You’re good friends with the people that you grew up with and even within the band you seem to work in a very democratic way.

White: Definitely. It’s the way the band works, and if it wasn’t that way it wouldn’t work. We are all very grateful for that and also understanding of each other and the roles each other play in the band and the importance of each other. That’s something that we’ve learned over time.

It must be rather difficult to keep this approach during work in the studio. How does that happen?

White: It’s come to a stage where it works very well, especially with making the last record. We started writing individually, we didn’t write together, and then we took everyone’s ideas and decided what we liked. It’s a collaborated thing. And it means that you’ve got to be diplomatic and you’ve got to be able to deal with people. You’ve got to have people skills in our band.

What is it like for you? It must be frustrating if you are convinced that you wrote the greatest hookline ever and then your bandmates tell you they don’t like it. How do you cope with that?

White: If you believe in it strong enough, you have to argue. And that’s hard. There are songs on this record that were definitely some people’s things and they were argued for months and months. In the end they made it on the record and everyone is happy. But you’re always dealing with the mood someone is in. You’re kind of playing a game, really, to get it right. At the end of the day you hope that everyone does want the best. You have to realise that it all works for the greater good, even if you are criticized. What comes out at the end of it is worth it.

Sounds like The Maccabees spend 80 percent of their time arguing.

White: That’s just how we write. For this record we worked two years. We wrote twelve songs, and that’s it, no more. There may be bands who write 50 songs in two years. But for us nothing slips through the net. If we don’t think it’s good, it’s gone.

How about the actual recording of Given To The Wild?

White: The way it sounds is a product of the way it was written. A lot of it was written before there was vocals, so it was like we were writing music in a cinematic way instead of songs. The music had to be so strong, that it was powerful and interesting enough even without vocals. We were producing ourselves, to an extent. We got our own studio in London, and we’re all recording our own bits. The majority of this record was done without actually playing as a band in the beginning. Later on, when the songs were arranged and written, we started to play together. But for the first part everyone was doing different things and we were switching parts. For example I was programming drums, and Sam, our drummer, would be writing melodies. I love that, because you can do anything. You don’ have to be just a guitar player. I am a guitar player, but to me that doesn’t define the way I work.

But doesn’t it feel strange to be lectured on guitar playing by your drummer or singer? If everyone is doing everything there must be a lot of competition going on within the band.

White: Yeah, but positive competition. We’ve started writing for the next record, and again we’re writing individually. After a few weeks you start to play it to someone, and they’ll hear it. For example Felix will play me something and I’ll go: Shit, it’s good. Then I go home and spend hours to make something that is equally as good. That’s how it works.

How about competition with other bands? You’ve been on the NME Awards Tour with The Drums and Bombay Bicycle Club, for example. Are you jealous if you look at where these two bands are now?

White: I think we’ve been a band that have really carved our own way. We’ve done every step to where we are, and that works for us and we are grateful for that. We’ve never had something that has made as jump to a whole new level. And I think if we had had that, it would have made it worse for us. Looking back on it, there is a huge amount of bands that have been around and been bigger than us and more successful than us, in the time we’ve been a band, that are now non-existent. No one would even mention them. And if friends of us become hugely successful, we feel pleased for them. You detach yourself. We’re doing our thing and they’re doing their thing. We also realize: Certain things appeal to bigger audiences and mass markets. And it’s amazing if you appeal to everyone, that is really hard to do and you have to admire that. But there is definitely things about us that keep us away from that.

If The Maccabees are such a closed circuit, how do you pick influences? How do you evolve as a band?

White: There’s a lot of recommending records to each other. But also we like a lot of different music and we don’t try to make everyone like what you like. It is quite rare that there is a band that all of us really love.

So I guess you can’t really tell me what the next record is going to sound like because you don’t know yourself until you all get together in the studio?

White: Yeah. There’s no way of telling. Everyone has got a different vision, and what we end up with is a combination of that. You never get exactly what you initially wanted. But you have to hope that what you get is better than what you wanted.

One slightly different task that I would like to talk about is the Olympics. You’re a Londoner – what did you make of it?

White: I couldn’t get tickets. And we’ve been on the road so much that I could just watch it on TV for a few days. I think the overall thing of it worked very well and London was a very nice place where it was happening.

I compare it to World Cup 2006 in Germany. Everyone expected Germans to be rather boring, dull and earnest and then it became a party. The Olympics seem to have done the same for England and especially London.

White: Yeah, I agree, and that credit goes to everyone involved. There was so much negativity involved beforehand. Everyone was: “I’m gonna get out of London, it’s gonna be a nightmare.” London has a tendency to be like that. But when the event happens, everyone changes and goes “I love London.”

Are you proud of it, a proud Londoner?

White: Yes, I am. We get to go to a lot of places. But London still stands out. It’s a pretty amazing city.