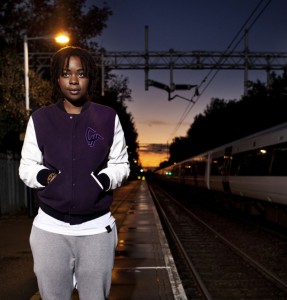 Speech Debelle would like to team up with Meshell Ndegeocello. Foto: Verstärker

There are occasions when interviews turn out to be thrilling, inspiring, funny. The interviewer finds out that some pop stars are massively charming, interesting people. The interviewee might realize that interviews are, at least in some cases, not always a waste of time. This is not that kind of interview. Indeed, talking to Speech Debelle before her gig in Leipzig was quite a struggle. Maybe she was even more tired than me, just having arrived from Hamburg. Maybe my questions were rubbish. I don’t know, but somewhere along the line it all went wrong. But see for yourself.

Hi, Speech! I must admit that I will have to start with two rather boring questions.

Debelle: Ones that you can get answer to on Wikipedia?

No, not that kind. Just ones that you probably get asked quite often. Boring question number one: Today is the last show of the German leg of your tour. How has it been so far?

Debelle: It’s been great. I loved it, I really enjoyed it, it’s been a good crowd, up for it. I’ve had fun – and eaten well.

Even today? That sandwich you just had did not look very delicious.

Debelle: But it’s been good. We are trying to keep it healthy, with soaked mushrooms, hummus and stuff like that. We drink a lot of alcohol, so I try to balance this.

(Some elderly person interrupts the interview, asking Speech Debelle for autographs. She signs some pictures without saying a single word, then we continue.)

Boring question number two: I am sure that I am not the first one to ask you about the Olympics, since a reworking of your track Spinnin’ was one of the official anthems. You might feel honoured, but wouldn’t you rather have been on stage in front of such a huge, worldwide audience?

I would have preferred playing the opening ceremony.

Debelle: As long as I’m getting paid I’m happy.

Did you ever aspire playing stadiums?

Debelle: Yeah, of course. Everybody does. That would be nice.

And would you also have liked to play the opening ceremony? It seems like a make or break moment to me.

At least it’s not a good moment to forget your lyrics.

Debelle: (giggles) No, I don’t think I’ll forget my lyrics.

Does that never happen?

Debelle: Yeah, it happens all the time. Happens every single show.

Have you been asked to play the Olympics?

Did you get any of it as a spectator?

Debelle: I was happy to watch it on television. And I watched Jamaica, the 200m in the O2. That was good.

I think they won?

I was asking about playing stadiums because it seems hard nowadays to draw such a big crowd. Do you think it might happen for you?

The key seems to be making a connection to your audience. But that probably means that you have to have in mind what they are looking for when you’re writing songs. Do you think that might be harmful? One might claim that you should just express what you want to say for yourself, without caring for peoples expectations in the first place.

Debelle: Yeah, I always do that. That’s the person I am, you know what I mean? I’ll do an interview with a middle class, white newspaper and talk about how many black men get killed in police custody. It doesn’t matter where I am, I always got a message.

Debelle: There’s certain things I don’t say. I think it is not necessary to cause offence. But I will certainly be provocative.

Things you won’t say – does that mean in your music or in interviews?

Debelle: There’s lots of things I wouldn’t say, that’d be crazy. Imagine if you said everything that came to your mind!

But it must be hard writing songs and not being able to let those feelings come out. Have you got some kind of anger within you?

Does that mean that you write that stuff down but don’t release it?

Debelle: No, some things I just don’t say. It’s just not necessary.

So let us talk about collaborations. You worked with people like Kwes and Roots Manuva. Who would you dream of working with one day?

Debelle: There’s a producer called Naughty Boy who I would like to work with. Emeli Sandé. Nas. Meshell Ndegeocello, she’s probably number one. She’s a legend, a God.

Have you met her already? Does she know about you?

Debelle (amused): I have no idea.

She could be considered as a role model for independence. In my opinion that is one of the major subjects on Freedom Of Speech, as well. Would you agree?

Debelle: I don’t know. It’s not something that I’ve thought of before.

Is independence important to you?

Debelle: Independence in what?

Maybe as a message that you want to get across. Telling people that they should make up their own minds, without prejudice. Tell them to do what they want to do without letting other people make the rules for them.

Debelle: I don’t know. If that’s what people get. You know, everybody takes something different. There is no one thing that you should take from anybody. You take what you need.

You won’t preach to your audience?

Debelle: No. I don’t care to. I just talk about what I want to do.

So how about you? Is it important for you to be independent?

Debelle: Independent in what?

Well, in your art, in your music.

Do you like that? Would you sometimes rather work on your own?

Debelle: No. I would never be by myself. I like working with people.

The advantage might be that you don’t have to compromise and that you’re not in charge to keep everyone happy.

Debelle: Yeah, I always have to do that. I’m the boss. I have to keep everybody happy to a certain extent. Make sure that they do what they need to do – but you can’t be horrible, you know what I mean?

Do you think you’re a good boss?

What would he say?

Debelle: I don’t care what he says (laughs).

Debelle: Yeah, I would.

What makes a good boss in your opinion?

Debelle: I think it’s important that you get your point across clearly. When you’re not clear then you leave it up to interpretation and then people do something that you don’t want them to do because they didn’t understand you. You have to make clear what you want. Still you have to give people room to add what they want to add – without changing the initial goal.

When you start out as a musician, that is probably nothing that you are prepared for: You might think it’s all about the music, and then suddenly you’re in a position where you have to tell people what to do.

Debelle: No, that’s always been my thing. And there’s not an artist who is successful that is not like me. All of us are like this. And we’ve all been like this from a young age. You can’t just wake up one day and be someone different. You always got it in you.

Being able to tell other people what to do might be considered as independence, isn’t it?

Debelle: If you want to rap about independence, you can do that. But …

Debelle: You want to.

Well, it was my impression, that it is an important subject on your album. But you definitely know better.

So which other subjects are important to you? Who are your major influences, maybe even outside of music?

Debelle: Lots of people. We’ll be here all day if I list these people. It doesn’t matter.

Okay, next question. You’ll be turning 30 next year. Are you worried?

Debelle: No, I’m looking forward to it. I enjoy being the age I am. And I still look about 16, so it’s all good.

Is there something that you still want to achieve before you turn 30?

Debelle: I’ve achieved enough to be thankful. I’m blessed. And if there’s something different, then that’s for me and my own private thoughts, you know what I mean? But I’m blessed to be where I am.

(She asks a member of her crew to sit down by her side and starts talking to him.)

When you look back at the days before your debut album came out, before you won the Mercury Prize and so on: What were your expectations where you might be by the age of 30?

Debelle: My expectations? I don’t know if I had any. I just wanted to try and make an album. I don’t think I was thinking about 2012.

Apart from celebrating your birthday: What are your plans for next year?

And also put it out next year?

Debelle: I don’t know. I haven’t started yet.

Are you a quick worker?

Debelle: I think I write songs quickly. But there is no quick work. There’s no timeframe in work. It’s finished when it’s right.

Have you got any pressure? Maybe the record company might tell you that they want an album by June?

Debelle: You know what? The only pressure I get is that the taxman is happy.

Well, that’s a nice situation to be in. Thank you very much.